SINGAPORE - Media OutReach - 25 February 2021 - UK-based neuromuscular medical device company, GyroGear Ltd has just concluded phase one of its seed round fundraise. This round was led by Foxconn Technology Group, the world's largest and foremost electronics manufacturer. Foxconn has invested £1 million (US$1.41 million) upfront. Participants in GyroGear's seed round include the UK Government Future Fund, Singapore venture builder Fidelium Group, and other established strategic investors and business leaders. Phase two of the seed round is ongoing and scheduled for completion in March 2021. 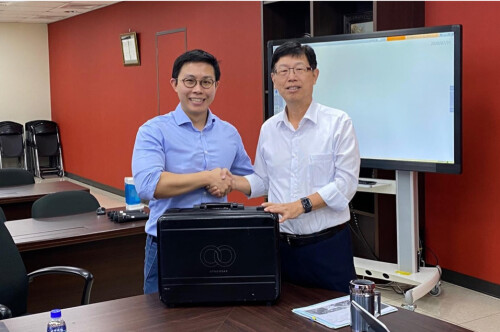 GyroGear is developing a wearable to help individuals with hand tremors. The wearable reduces tremors, so they may perform their day-to-day activities. This also brings relief to caregivers and family members.

"In the US alone, the economic burden of Parkinson's Disease amounts to $51.9 billion every year, growing to $79.1 billion by 2037. Essential Tremor alone is up to 20 times more prevalent than Parkinson's, and can manifest at any point in one's life. The impact of not being able to use one's hands is beyond what any numbers can describe. GyroGear was founded to specifically address this large unmet medical need, and to provide simple, elegant solutions to restore the quality of life to 200 million tremor patients worldwide," explains Dr Faii Ong, Founder and CEO of GyroGear.

Dr Ong adds, "Our partnership with Foxconn elevates GyroGear's existing world-class engineering and advisory base with further strategic and technical expertise. It grants GyroGear access to class-leading advanced technologies and capabilities as we ready our flagship product, the GyroGlove™, for international launch."

GyroGear's flagship product, the GyroGlove™, is the world's first and only wearable medical device that adopts cutting edge aerospace technology and satellite-grade mechanical gyroscopes. The technology effectively and swiftly counteracts hand tremors, thus restoring normal use of the hand. Lightweight and efficacious, the GyroGlove™ unobtrusively empowers users to overcome their daily challenges, offering hope to the millions of tremor sufferers worldwide who struggle with everyday tasks.

Potential users include those with Parkinson's Disease and Essential Tremor, with both conditions affecting over 200 million people worldwide. Prevalence of both diseases has been rapidly increasing this past decade. Current therapies include medication and neurosurgery. Medication is accompanied by significant side effects. Whereas neurosurgery is limited to a small minority of patients due to its inherent risks. There is currently no cure for hand tremors.

"We are eager and excited to partner with GyroGear and bring the GyroGlove™ to Asia. The partnership is another reflection of our long-term commitment to our "3+3=∞" vision, which symbolises the infinite possibilities created by Foxconn's industrial advancement and emerging technologies," said Young-way Liu, Chairman of Foxconn Technology Group.

Paul Lim, Chairman of Fidelium Group and Senior Advisor to GyroGear Ltd added, "GyroGear fills a huge gap in today's medical spectrum. Many tremor patients suffer in silence as the disease robs them not only of the ability to carry on simple daily activities, but more importantly, many suffer silently, with mental trauma caused by embarrassment from uncontrollable shaking. They avoid going out to public spaces and recluse themselves from social activities. Founder CEO Dr Faii Ong is a visionary leader who has led his team to invent this elegant solution that will change the lives of millions of tremor patients in the world."

The funds raised will be used for clinical trials, regulatory approval and further R&D. This round closes March 2021.

GyroGear Ltd is a neuromuscular medical device company incorporated in 2016 by Dr Faii Ong. It is the only medical device company worldwide to utilise mechanical gyroscopes. Whilst still a student at Imperial College London, Dr Ong was moved to action after witnessing the distress experienced by a 103-year-old Parkinson's patient at a London hospital. Dr Ong and his team invented the GyroGlove™ as a solution to help millions in the same situation.

The GyroGlove™ has demonstrated promising results. Volunteers are able to put on the GyroGlove™ independently, and start to feed themselves, insert keys into keyholes, write once more, and for some, even thread a needle and sew again.

Since its inception, GyroGear has been featured prominently in global media publications including Popular Science, MIT Technology Review, the BBC, Forbes, Reuters and the Washington Post. In December 2020, GyroGear won first runner-up out of 7,500 participating start-ups from 159 nations, at SLINGSHOT 2020. The judges were Eduardo Saverin, Forest Li, Sequoia Capital, Temasek and SG Enterprise. SLINGSHOT 2020 is the leading start-up competition in South East Asia, organised by the Singapore government.

GyroGear has been awarded over $3.3M in funding from the EU Horizon 2020 and Innovate UK, to develop the GyroGlove™.

GyroGear is based in London and Singapore.

Established in Taiwan in 1974, Hon Hai Technology Group (Foxconn) (2317: Taiwan) is the world's largest electronics manufacturer. Foxconn is also the leading technological solution provider and it continuously leverages its expertise in software and hardware to integrate its unique manufacturing systems with emerging technologies.

Announced by the Government of the United Kingdom on 20th April 2020, the Future Fund issues convertible loans to innovative UK companies with good potential that typically rely on equity investment. The scheme is designed by the government and delivered by the British Business Bank.

Fidelium Group is a venture builder, investment and management consulting company with a presence in Asia, Europe, the United Kingdom and the United States.

The company provides a suite of comprehensive services for SMEs and start-ups which include corporate structuring, corporate finance, fundraising and corporate secretarial services.